This is from a annual performance/workshop/seminar in May of 2011 in Rome, Italy. It’s a multi-day festival with artists, engineers, musicians, and all manner of interesting craziness. I was invited to give a lecture/presentation and perform with the BATCHASS crew, who I met the previous year. The other work was great, but the best part by far was getting to meet all the other artists involved, and the connections/relationships that I made there.

These guys are doing it every year from what I understand– check them out, it’s definitely a good time:http://www.liveperformersmeeting.net/

I did a workshop on how to create a Flash based Resolume plug-in that loads a Twitter feed, using dynamically generated sliders and dynamic font control. You can load any twitter feed on-the-fly, and it will update automatically. I gave this presentation at the LPM festival in Rome, Italy in May of 2011 (www.liveperformersmeeting.net). There’s also a (very rough) tutorial here if you want to build one on your own!

The crowd was surprisingly into it, the demo went smoothly (I was prepared for the internet to go down while doing Twitter stuff, which it did, so it was all good since I had backup twitter data stored locally) and I was even asked to do a live performance later that evening using the plug-in! 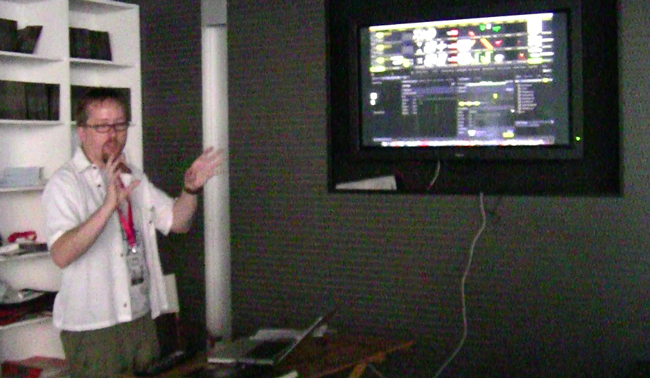