Stress test of the Epson POWERLITE L1300U vs Christie DH50.

Fog machines! Edge Blending! Video mapping! Epson is on the left wall, Christie is on the right.

Here’s some notes I took from the evening: 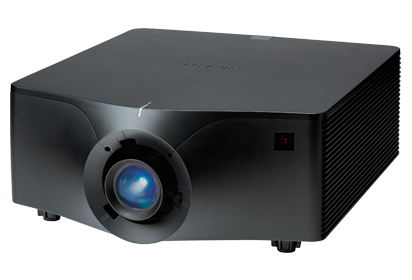 Clean form factor, a little smaller than the Epson. Comes with a socket cover to protect the interior for when the lens/bulb isn’t inserted, which is nice. Although the manual says that you can remove the lens without any tools, in fact there’s a “bulb release” button inside the lens mount that you need to press to unlock. Unless you have alien hands with creepy skinny long fingers, you’ll need a pen or a screwdriver to reach past the lens in order to press the release button inside the lens mount.

Menu system could use some work– wasn’t able to find a “reset settings” button after a few minutes of searching. This becomes an issue if you’re doing multiple setups or using a rented projector– the previous user might have left some weird color correction, keystoning, geometry correction, etc, so a global “reset to factory settings” becomes REALLY handy.

Didn’t seem to autodetect input– when I plugged in my signal (HDMI over CAT-5) it would cycle thru all input modes before deciding on the correct one. Couldn’t get focus or zoom to work, it may be that the lens was fixed-width or something that doesn’t allow it. The focus seemed to “just happen” no matter where I set the projector up. 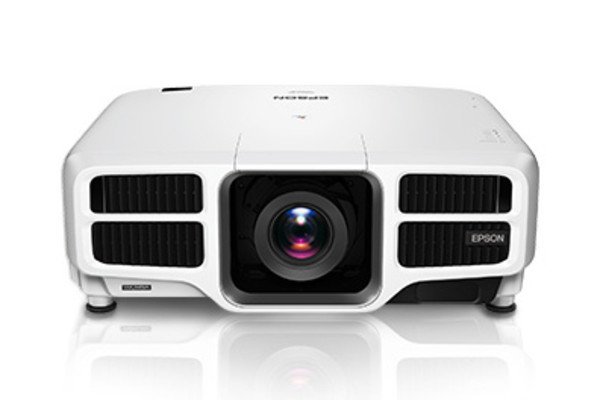 Bigger, bulkier, and more heavy than the Christie. Bulb/lens swap is super easy, altho you have to pop off a fussy “access cover” to get to it. Inserting the lens is pretty simple, just flip a lever, insert the bulb, then flip it back to lock into place. No alien hands necessary. I’m pretty familiar with the Epson Pro series, so I was able to navigate around and reset all keystoning, color correction, etc without any trouble.

Autodetected inputs without any issue, which was nice. Usually the Epsons like to do an “auto calibrate” thing on startup that focuses automatically but that didn’t happen this time. Maybe I wasn’t paying attention and missed it? The main thing is that I was able to restore default settings quickly, then turn off all the stuff I don’t want (“enhanced 4k”, etc).

This brings me to color comparison!

Before I got everything mapped and set up, I wanted to do a side-by-side color comparison. I ran some basic all-white geometry patterns and overlaid them so I could check out any subtleties. Seemed like the Christie was more “yellow” than the Epson out of the box.

The brightness was comparable, so I don’t think it was that. I went thru the menu system on the Epson and did a factory reset, then got on the Christie and put all settings (brightness/contrast, gamma, etc) to mid-range. This is where a “default” or “reset to factory settings” would have been nice. Didn’t seem to make a difference. Finally found a “warmth” setting that had a range of “warmest–>warm–>cool”, set it to “cool”, and it got the two projectors pretty close.

Probably could have fiddled with the “tint” or something but I wanted to get this up and running fast, as if I was on-site with a client crawling up my ass.

You can see the color difference– the Epson on the top is much more blue, the Christie on the bottom is much more yellow, both running the same signal output from my media server. 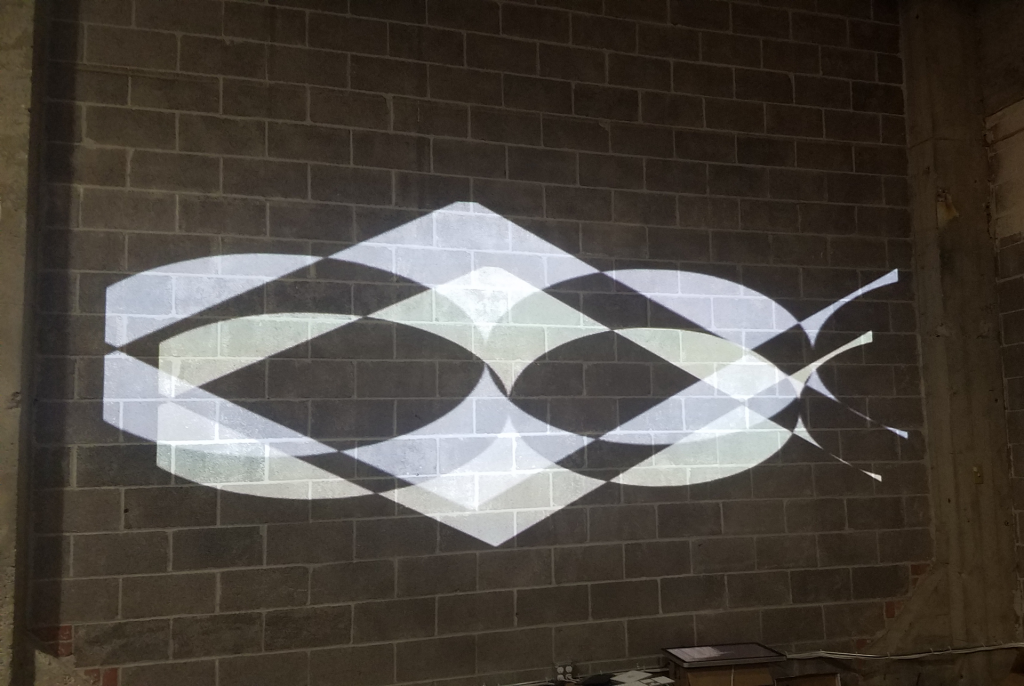 Even after I switched to the “cool” setting on the Christie, it was still a little yellow. 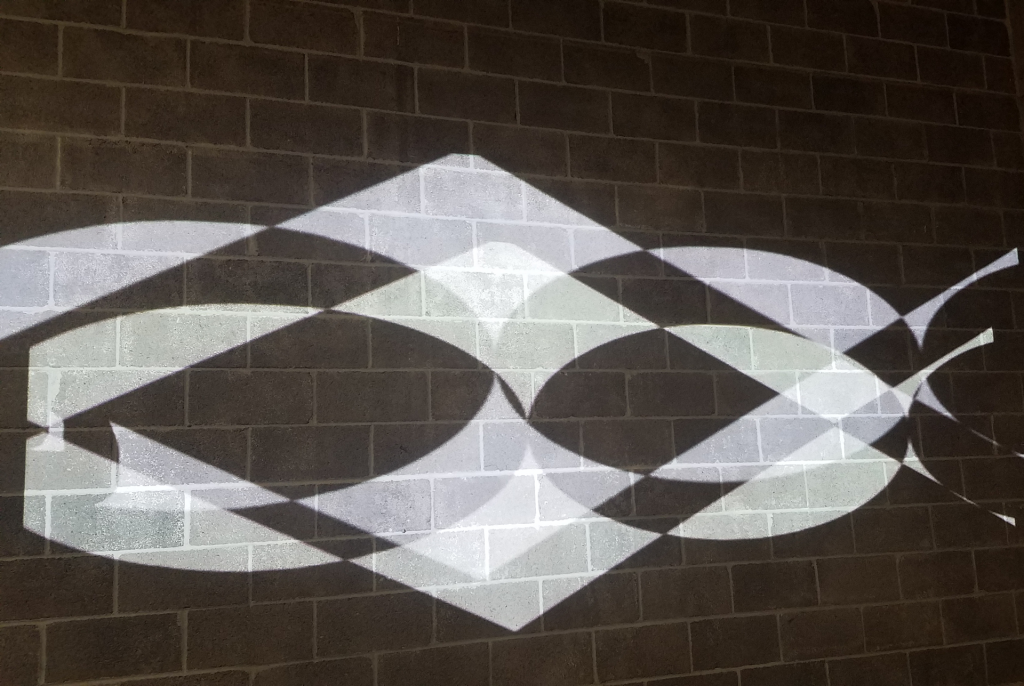 So what’s the verdict? Both these projectors are head and shoulders brighter and better than a regular lamp projector, but we already knew that.

For me the main considerations are: signal calibration, hardware setup, and color accuracy.

Calibration:
As far as signal calibration goes, there really needs to be an obvious reset to factory settings, but otherwise it was pretty standard. I’m gonna give the Christie a pass on its menu system since I didn’t RTFM and it’s no more unintuitive than any other projector I’ve ever used.

Hardware:
Hardware bulb/lens swap is slightly more finicky on the Christie– if I had to do some quick fixes while in the field I might prefer the Epson, but it’s hardly a deal breaker.

Color:
As far as color goes, I’m gonna go with the Epson. Out-of-the box the color space seemed more accurate– the reds were nicely saturated and the whites are how I like them: cool, even, and crispy.

Did I use a color calibration tool? No. Did I project on a nice white screen? No. I compared two quick and dirty setups on a less-than ideal surface, which I consider to be a real-world test.

Update: my sales rep over at Compview reminded me that the Epson is LCD while the Christie is DLP, which should explain some of the color differences I’m seeing. My experiences with lower-end projectors (I’m thinking about 1k lumens in particular) is that the DLPs tend to have brighter whites, so this was kind of a surprise. 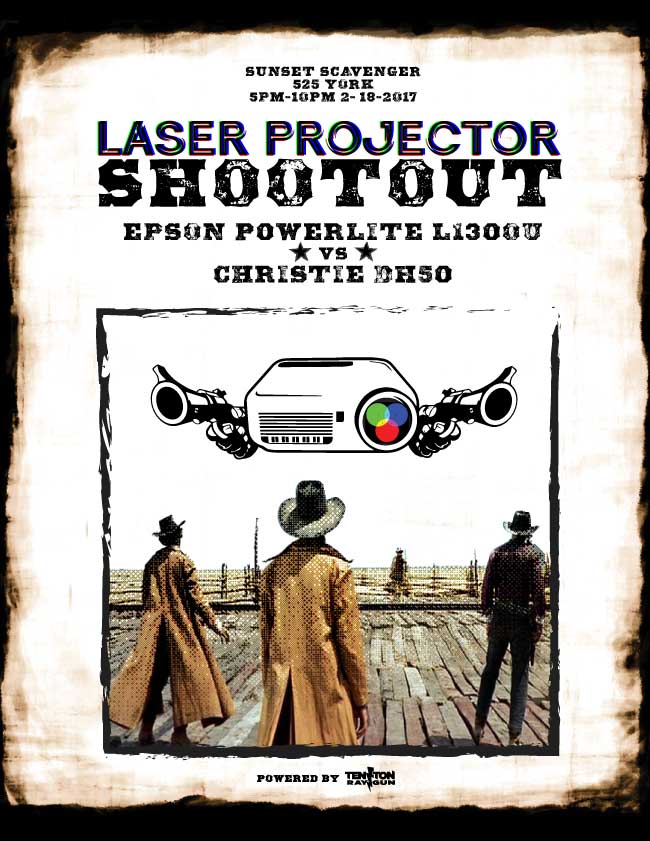