This project was shown in Niche Gallery in Los Angeles in 2007… it feels a little dated now. At the time there were a lot of politically themed video games at the time– one was called  Quest for Bush/Night of Bush Capturing, supposedly an al-Quaeda recruiting tool. You could basically run around and shoot avatars of George W Bush. Turns out it was a re-skin of a game called Quest for Saddam, made by Jose Padilla– a founder/member of the United American Committee (UAC), a political action group focused on “promoting awareness of Islamist extremist threats in America.”

I found this to be really interesting– these corny, crudely made political games were remixing each other, it was like playing “dozens” except with video games! Here’s the “skin” files for the two games– when I took a look at the source code it turned out that all these guys did was swap out the image file– even the file names were the same. 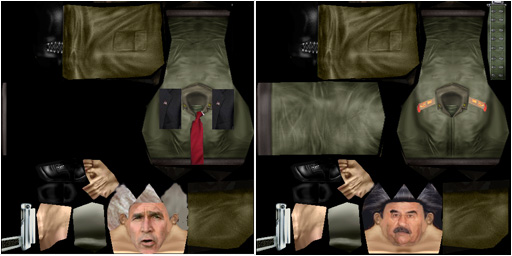 So, I thought it would be amusing and interesting to do another revision and set the bar a little higher– use religious figures instead of political figures by making an army of Jesuses that had to kill or be killed.

There’s something about the spectacle of “Jesus” running at me with a shotgun chanting “God is Loooove” that makes me chuckle every time.

Does playing the game mean that you should shoot Jesus, or that Jesus should shoot you? I don’t think so, any more that reading a book about crime makes you a criminal.

Is this project a form of blasphemy? Once again, I have to say no– the Bible has some pretty specific instructions on not worshipping graven images– a video game is certainly not Jesus.

The installation had two monitors and control setups so players could compete head to head, and at the end of the night the winner got a trophy! It was a lot of fun, and everyone seemed to have a good time.

Except for the people who sent death threats, who didn’t come to the show.