Gameplay demo for the “Bull in a China Shop” game for the VisualTouchTherapy app. Use hand waving to move the animal around the screen, knocking over delicate froo-froo objects like teacups, coffee tables, wine glasses, etc. Ultimately I want to have destructible environments and props, and a larger environment to run around with.

I used Box2D for the physics engine, which was not as painful as I thought it would be… I’ve used it before but only with actionscript, and that was a couple years back. Doing it in Java took a little more effort, but I had quite a bit more control over the process. The most fun part was animating the running bull motions, I used a lo-res Muybridge sequence to trace from. 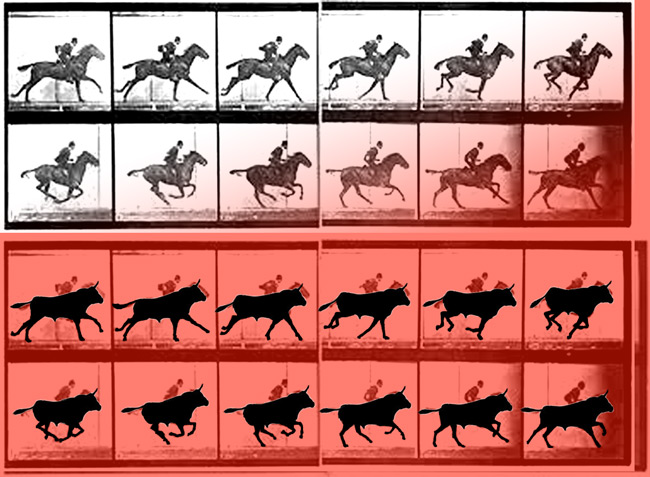 All I had to do was zoom into the horse frames and trace over them, but changing the horse head to a bull head. I used some silhouettes of bullshapes to get me started, then just tried to keep things lined up and make sure that the bull body was “leaning” in synch with the horse– if you notice the horse kind of tilts forward halfway thru its gallop. The legs were just a straight trace over the horse legs, but I tried to make them a little fatter and stubbier.

And there you go– running bull! I saved as .pngs and made a class file to load in the images in sequence over the Box2D object. To get the bull to turn around as it runs back and forth (I didn’t want to re-draw the animation facing the other way, obviously) I just had the images’ width multiplied by -1 (so its width is exactly reversed), then I moved it over by its “positive” width… like flipping over a transparent piece of paper. The “flip” was activated depending on where my mouse/hand is in relation to the image. Easy peasy.